The light of the shining January Wolf Moon falls onto the crisp, glimmering snow crystals of the Michigan Winter Woods.  Winter is at its peak — the smell of cold, crisp, harsh air reminds us of the scarcity of the dark months.

But even in the depths of winter’s darkness, nature offers us healing winter remedies for the season’s ailments. Up above in the canopy of the woods, the boughs of White Pine sends songs of its healing for the respiratory system into the breeze through the trees. Down below on the forest floor, the garlicky wild chives poke through even the most frozen ground, cold but still carrying that flavorful aromatic of onion. 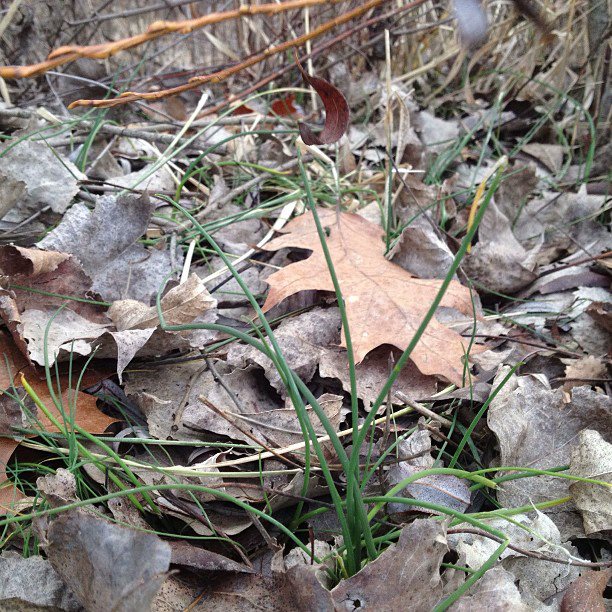 With the drying, resinous aromatic of the pine and the stimulating flavors of the wild chives, together both can be brewed as teas to help dispel the damp and stagnant lung mucous of winter’s respiratory distresses. It can also help release stuck mucous in the sinus cavities. And the Pine adds in a bit of Vitamin C for an extra boost of this needed winter vitamin. Because of this tea’s drying nature, juice of lemon and the addition of honey are nice to add a soothing, coating element to the tea. Also from the woods, wild cherry bark (Prunus, sp) can be added to help quell an  unproductive spasmodic cough and support it to be more productive in eliminating congestion.

For sustainable gathering, collect fallen boughs and branches of White Pine after strong winds have passed through the woods and clip the tops of the chives as they are perennial (at least here in the Great Lakes) and will regrow as the sunlight returns to the forest.  Brew handfuls of both pine needles & tips along with handfuls of chives in equal parts hot water for 10 minutes. Sip hot.

For steam inhalations, put a few handfuls of the plants into a steaming pot. Remove from the stove and cover your head with a towel to help open the most stuck of sinuses. This trick below — particularly the use of the child’s towel – was handed down to me from teacher and friend herbalist Jim McDonald (photo credit: T. Beel, 2013).

The aroma of the simmering pine also helps clear the air of stagnant winter ick that can collect inside the home. Simmer pine tips and needles on the stove, releasing the aromatic oils into the air.

← “Chestnuts Roasting on a Open Fire”
The Best Work Ever →

< Previous Next >
+ Add your own event Eventbrite